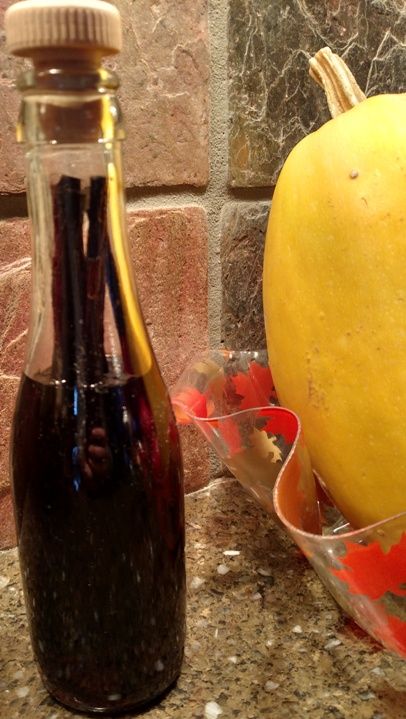 Pure vanilla is so expensive to buy. Have you been shocked at the price in the store so you just go ahead and buy the cheaper imitation version? Yep, me too. Well, at least I used to. Now I make my own. And I even make enough to give away for Christmas gifts! It takes a little time, so you need to start soon!

A Fifth of 80 proof Vodka (or glycerin)

Tahitian Vanilla Beans (I get mine at saffron.com)

The ratio is 5 beans per cup of vodka.

Use any glass jar that has a lid. Even a quart-sized canning jar. Pour three cups of vodka into the jar.

Slice the (15) vanilla beans in half lengthwise. You’ll see tons of what looks like brown goop. That’s actually the good stuff! Scrape that out with a knife and add to the jar of vodka.

Place the scraped out vanilla flecks and beans in the jar with the vodka and screw the lid on tightly.

Now wait. Give it a shake every now and then during the process.  It will become dark within just a few days, but it’s not really going to perform like vanilla until after about 6 weeks. And vanilla extract only gets better and stronger with age. I actually make 2 batches every year so I have enough to give and enough to use myself!

After at LEAST 6 weeks, pour into 2 or 4 ounce bottles.

I love to cook simple and family-friendly recipes that I can share with you! View all posts by cookinwithbrooke

This is my blog. It will probably contain mostly recipes. Sometimes, I’m sure I’ll have other ramblings because, well, life. Thanks for being here!